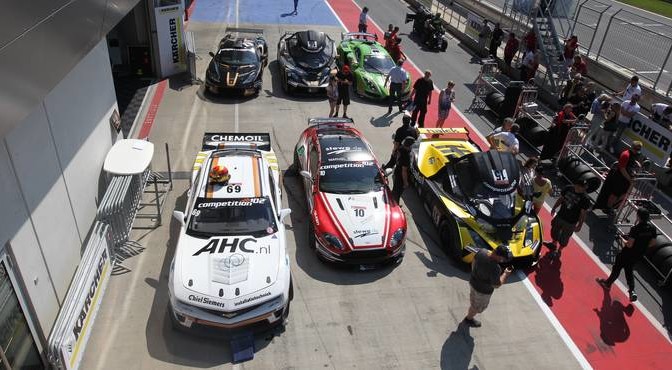 For the first time the Competition102 GT4 European Series travelled to Austria to partner the ADAC GT Masters at the Red Bull Ring. All drivers and teams looked forward to race at the 4.326 km track, especially after the successful balance of performance test of the new cars. This resulted in thrilling battles between the drivers competing with different vehicles such as the KTM X-BOW GT4 with Peter Ebner (AUT) / Sascha Halek (AUT) taking a home win. Also the Chevrolet Camaro GT4 was spotted at the front of the field with championship leaders Jelle Beelen (NED) / Marcel Nooren (NED) passing the chequered flag first in race two.

The front row grid for Sofia Car Motorsport with both Sin R1 GT4 vehicles was impressive too and the drivers were challenged for podium finishes in the second race. Pavel Lefterov (BGR) earned much TV time as he fought for third place in the AM category in race one. Daniel Uckermann (GER) won both races in the AM division with the KTM X-BOW GT4 and was ranked second overall. But that went not without a fight. He changed positions several times with Rob Severs (NED) in the BMW M3 GT4.

With the footage being watched over 500,000 times online, there was an unfortunate last lap crash to report. Fortunately both drivers were unharmed thanks to the GT4 safety standards.

The Red Bull Ring in Austria was welcomed by many drivers. Some of them did have extensive experience, but for most it was a new exciting challenge. Three drivers enjoyed a home advantage like Dietmar Lackinger with the BMW M3 GT4 and Ebner / Halek. “I work here as an instructor, so I know the track very well,” Ebner said. The Austrian driver started to race with motorcycles at this track, before switching to cars. He also provided the new drivers with a bit of advice: “At first the track doesn’t look that difficult, but it is very important to carry enough speed in the exit of the corners that go up hill, because these turns are followed by long straights.”

Who stops Beelen and Nooren?

With six podium finishes out of six races, Jelle Beelen (NED) positioned himself and teammate Marcel Nooren (NED) as title contenders. The 20-year-old, who is new to the series, gained extensive racing experience in Dutch national championships. He has learned quite a few tracks as well, but the Red Bull Ring was new to him. Beelen acknowledged Ebner’s advice. “The track was indeed much more difficult than I thought. But what I like about the circuit is the elevation differences and the different type of corners,” he said. Beelen was actually quite surprised that he could spray champagne in after every race so far. “Before the start of the season I couldn’t have hoped for these results. I’m really pleased with that though!”

One of the new participants in the Competition102 GT4 European Series was Marcos Siebert. The 19-year-old from Argentina was phoned by Jose Luis Talermann if he would be able to join him in Austria, sharing the Sin R1 GT4. Siebert, normally competing in the Italian Formula 4 championship, didn’t hesitate to jump into the car. “It felt very strange during the first few laps, as I have never driven a car like this before,” Siebert said. However, the youngster had valuable experience to share. “I raced at the Red Bull Ring with the Formula Renault 2.0 Eurocup last year, so I know the track while Jose Luis knows the car and is not familiar with the track. I’m very happy to have received this opportunity and I would like to thank my teammate and Sin Cars for making this possible.”

Spa-Francorchamps is together with the Nordschleife one of the favourite circuits of the drivers racing in the Competition102 GT4 European Series. Partnering the ADAC GT Masters of the second time, the Belgian track hosts the seventh and eight race of this season during the weekend of 19 – 21 June. Hendrik Still, one of the other Sin R1 GT4 drivers, looks forward competing at Spa that is a track he knows really well. “I coach a lot of drivers there and it’s not far from my home as well,” he said. “I really love the fast corners like Eau Rouge. I think we can win a lot of time with our race car as one of its strengths is its power going uphill.”