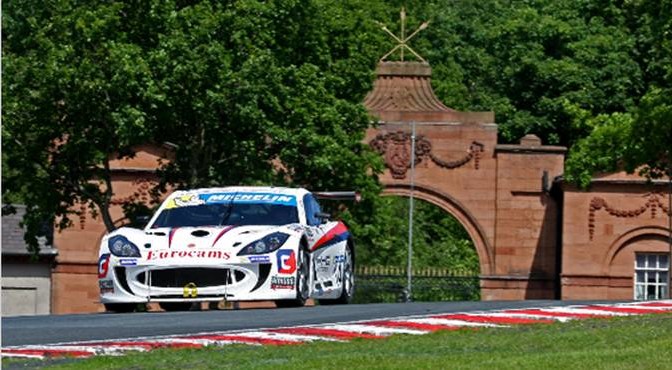 Will Burns maintained his challenge for this season’s Ginetta GT4 SuperCup title at Oulton Park in Cheshire last weekend.

The Weston-super-Mare racer headed to Oulton Park vying for the top of the standings alongside HHC Motorsport team-mates Carl Breeze and Jamie Orton.

Following a less than ideal start, Burns lost a single place off the start but was sitting in a comfortable fourth place throughout the vast majority of the race, and was sure to bank precious points towards challenge the top two in the standings.

But a momentary lack of concentration sent the Cases Ltd and Eurocams-backed ace across the grass in the latter half of the race. He rejoined in the same position but with grass now obstructing the radiator grill, the car’s engine, new for the weekend, began to overheat.

Burns therefore wisely decided to stop the car and pull over to prevent any potential damage to the engine or other parts on his Ginetta G55 GT4 machine.

Sunday’s second and final race was therefore going to be one of attrition and battling through the field to chase the leading pack. Burns quickly did just that scything through both the Amateur and Pro class drivers, up to a fantastic sixth place on a circuit which is renowned for its lack of overtaking opportunities.

In his valiant efforts to claim fifth place, Burns finally had to concede his sixth place after he went a little wide, and he remained in that position to the chequered flag.

Will Burns is already preparing to fight back at the next rounds of the Michelin Ginetta GT4 SuperCup at Croft in north Yorkshire on June 27-28.

“That was a pretty tough weekend, but one that I’m already determined to quickly put behind me and get back on track in two weeks’ time,” Burns says.

“It looked like it was going to be another good weekend following qualifying and I had anticipated at least one, if not a podium in both races at Oulton Park. As always this year, I had some great pace in my car thanks to HHC Motorsport, but after I made a slight mistake, I didn’t want to risk any damage to the car when grass filled the radiator grill.

“I’m sure I did [circuit owner] Jonathan Palmer a favour by helping to cut the grass for him!

“Sunday’s second race was therefore all about damage limitation, particularly on a circuit which is tough to overtake on. But to take a seventh place finish was a good fightback. I’m glad it was only a double header weekend though, instead of the usual three races.

“I’ve now got my bad luck out of the way and I’m already fully focused on the next rounds at Croft. It is the local circuit for HHC Motorsport, so I’m sure that the team will have a good set-up and I’m positive that I’ll be back challenging both my team-mates who began tripping over each other at Oulton Park.”

The next round of the Michelin Ginetta GT4 SuperCup will take place at
Croft in north Yorkshire on June 27-28.
It will receive live television coverage on ITV4, on June 28.

Notes to Editors: Copyright-free images of Will Burns, supplied courtesy of Graham Holbon.