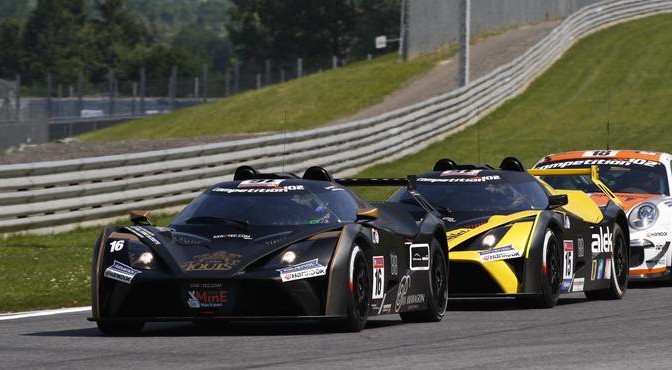 With the chequered flag in sight, Jörg Viebahn (GER) and Rosen Daskalov (BGR) crashed coming up the main straight in race two of the Competition102 GT4 European Series at the Red Bull Ring. The Aston Martin Vantage GT4 and Sin R1 GT4 touched and both smashed into the barriers, launching the cars into the air. Fortunately both drivers where able to walk away from the incident and went to hospital for final checks. It made an end to a great weekend of racing in Austria, in which Daniel Uckermann (GER) made another stunning appearance, racing the KTM X-BOW GT4 to two class wins in the AM category. ZaWotec teammates Peter Ebner (AUT) and Sascha Halek (AUT) won the first race with their KTM machinery, but were a bit unlucky in the afternoon. Championship leaders Jelle Beelen (NED) and Marcel Nooren (NED) claimed victory in race two.
Brilliant win for Ebner / Halek

Ebner started race one from pole position and defended very well in the first corners, keeping Nooren behind him. Viebahn, who started from seventh, enjoyed the best start of all and moved up to third. The driver of the Aston Martin Vantage GT4 was in second place after the mandatory pit stop, attempting to close the gap to the KTM driver in front of him. The German had to look into his mirrors more often as Beelen, who had taken over the wheel from Nooren, was eager to move up one place. Both touched in the final stage of the race, but were able to finish in second and third behind Ebner / Halek.

ZaWotec teammate Daniel Uckermann concluded the race as best AM driver, finishing in fourth position. After losing a couple of places during the first laps, the German race car driver managed to settle in fourth. On the podium he was accompanied by Jose Luis Talermann (ARG) / Marcos Siebert (ARG), driving the Sin R1 GT4 and Pavel Lefterov (BGR) in the Lotus Evora GT4. They all enjoyed various battles throughout the race, competing against PRO drivers as well, like Duncan Huisman and Luc Braams who were sharing the Chevrolet Camaro GT4. Despite a collision with BMW M3 GT4 driver Rob Severs (NED) caused by a brake failure, the Dutch driving pair managed to finish in fifth.

The front row of race two coloured yellow and green with the two Sin R1 GT4 vehicles. Talermann overtook his teammate Hendrik Still (GER) at the start, but served a drive through penalty for an incorrect getaway shortly after. Still defended very well against Huisman, but his rival retired from the race. After the mandatory pit stop, Nooren passed the leading Sin R1 GT4, which was now piloted by Daskalov. Meanwhile Uckermann and Rob Severs (NED) battled lap after lap and changed position several times challenging each other for a place on the podium. Both managed to pass Daskalov, finishing second and third. Uckermann was therefore also the best AM driver, followed by Jan Kasperlik (GER) / Dietmar Lackinger (AUT) and Thomas Krebs (DAN) / Carsten Struwe (GER).

Daskalov and Viebahn were fighting for fourth in the final lap and touched in the last corner, sending both cars at full speed into the barriers. Fortunately both drivers were, although with a bit of help, able to step out of their wrecked vehicles and were taken to hospital a check.

“I tried to safe the brakes in the beginning of the race, after having seen what can go wrong,” said race winner Beelen who debuted in the series. “I didn’t expect that we would finish six out of six races onto the podium. That’s a great achievement.”

Uckermann, who celebrated two AM class wins and a second place overall, said: “It were two hard races, but the battles for positions were really fair. I’m very happy to perform so well here at the Red Bull Ring as the track normally doesn’t really suit to our car.”

Thanks to a third place in race one and concluding the weekend with a win, Beelen and Nooren extended the lead in the championship.