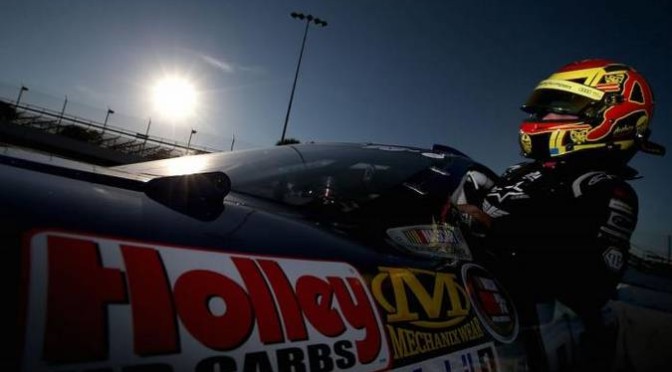 The first race in Kumpen’s American NASCAR program will be July 17 at New Hampshire Motor Speedway, and will include the following NASCAR K&N Pro Series East and NASCAR XFINITY Series races:

The campaign will be part of the Nexteer Road To Daytona program – the path designed by Nexteer and NASCAR Whelen Euro Series to bring European driver to race in NASCAR in the United States. Kumpen will also be sponsored by Leaseplan, EL System and Keupers.

The announcement was made Sunday morning prior to Day 2 of the American SpeedFest III race weekend at historic Brands Hatch Circuit in England.

“I’m really excited about this program,” said Kumpen, who made his U.S. NASCAR debut in February at New Smyrna Speedway in Florida. “The NASCAR K&N Pro Series is already at a very high level and the NASCAR XFINITY Series will be even tougher.

“The goal for me is to gain experience, but my main goal is to finish all races. I’m not setting any bar, I want just to finish all the races and then see what we can do for the next year. To race in the NASCAR XFINITY Series is already a big step for me. I am really happy about what we are achieving with the Nexteer Road to Daytona program and all the help from Jerome Galpin, all the NASCAR Whelen Euro Series and everybody at NASCAR. Personally it is a dream come true and I’m really excited to go to the U.S. again.”

“Anthony has been a tremendous ambassador for the NASCAR Whelen Euro Series and NASCAR,” said Steve O’Donnell, NASCAR executive vice president and chief racing development officer. “This program is what the series is all about, providing the opportunity for drivers to compete in NASCAR in Europe and also move up the NASCAR ladder in the United States. We look forward to watching Anthony represent the NASCAR Whelen Euro Series this summer.”

The Brands Hatch American Speedfest, the third event of the 2015 NASCAR Whelen Euro Series season, is one of the highlights of the calendar taking place in the United Kingdom on June 6-7. In addition to O’Donnell’s attendance, NASCAR XFINITY Series driver Jeffrey Earnhardt raced in the event, at the wheel of the #55 Whelen – Amai.fr Chevrolet Camaro, testifying the attractivess of EuroNASCAR for the American drivers.

Kumpen will not be the only NASCAR Whelen Euro Series driver to race in the US this summer, as other programs promoted by the Nexteer Road To Daytona will be announced in the coming weeks.