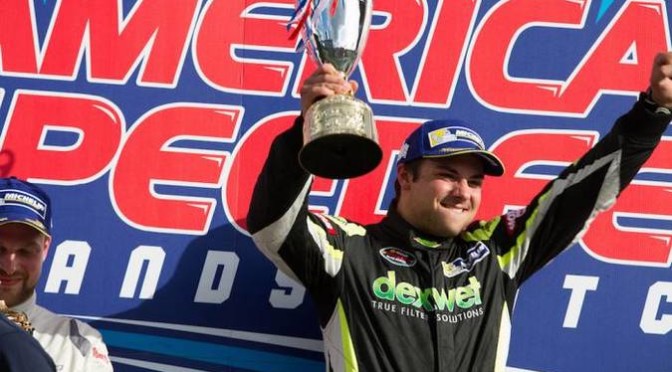 By dominating the 2015 NASCAR Whelen Euro Series Round 5 in Brands Hatch, Florian Renauer (#5 Dexwet Renauer Team Ford Mustang) took his maiden win in his young NASCAR career, leading flag to flag in the 30-lap ELITE 2 weekend opener. The Austrian started from pole and the only threat to his lead came on a restart on lap 7, after a contact in turn 1 between Thomas Ferrando (#37 Knauf Racing Team Ford Mustang) and Bert Longin (#11 PK Carsport Chevrolet SS) triggered a red flag period.

When the race restarted, Renauer immediately jumped to a comfortable lead ahead of Philipp Lietz (#67 GDL Racing Ford Mustang), who was second under the checkered flag, 3.643 seconds behind the winner, followed by a very consistent Salvador Tineo Arroyo (#51 CAAL Racing Chevrolet SS), who notched his second podium finish of the season.

“It’s the greatest day in my life because it’s my first international win. This morning I took the pole, I was fast but I know that in a NASCAR weekend anything can happen. Luckily I had a good start and restart and I managed to win it. I’m very very happy today!” said the winner, now fourth in points.

Nicki Petersen (#44 GDL Racing Ford Mustang) finished fourth, ahead of Gianmarco Ercoli (#9 Double T by DAV Racing Chevrolet Camaro). By completing the top-5, the Italian managed to save his championship lead: he and Lietz will start Round 6 on Sunday on top of the standings with 211 points.

The Slovakian driver was fifth when he was involved in a contact with Maxime Dumarey (#24 PK Carsport Chevrolet SS) that sent him spinning in the last corner and resulted in a drivethrough penalty for the 2014 ELITE 2 Champion, who finished the race eleventh.

The eventful start saw Ferrando and Bert Longin (#11 PK Carsport Chevrolet SS) involved in a contact at Paddock Hill bend that resulted in a retirement for the Belgian and a 30 seconds penalty for the Frenchman, who managed to post the fastest race lap and will start from the pole on Sunday, with Renauer on his side in the first row.

The ELITE 2 Round 6 is schedule on Sunday June 7 at 4:55 pm CET and will be streamed live on fanschoice.tv
ABOUT NASCAR WHELEN EURO SERIES

The NASCAR Whelen Euro Series was founded in 2008 and established the NASCAR official European Series in January 2012 thanks to a long-term partnership signed with NASCAR (National Association for Stock Car Auto Racing), Team FJ, a Motorsports company located in Blois, France, and Whelen Engineering as title sponsor of the Series.The season is made up of 24 races, equally split among ELITE 1 and ELITE 2 divisions, on the best European tracks. Euro NASCAR introduced a stunning innovation on July 7-8, 2012 by organizing the first ever NASCAR race on an oval track in Europe on a half-mile speedway built in the downtown of Tours (France). With four races in two days, these 400 HP V8 monsters provide pure racing action and thrilling bumper-to-bumper battles as well as a lot of family fun around the track! In the pure NASCAR tradition, race fans can get closer to the action than ever and feel the unique in Europe paddock atmosphere thanks to drivers, teams and cars always available for the spectators.The series attracts drivers from all over the world, all willing to fight on track for the win and take the first step towards becoming a NASCAR star in the U.S