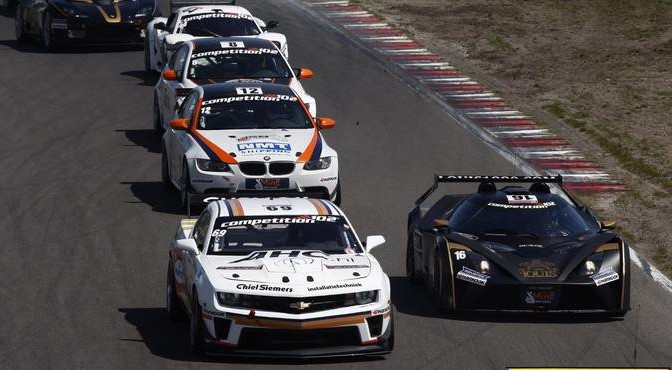 The next two races of the Competition102 GT4 European Series will be held at the Red Bull Ring in Austria, partnering the ADAC GT Masters during the weekend of 6 – 7 June. Three drivers will have the honour to battle against their rivals on home soil, including race winners Sascha Halek and Peter Ebner. They debuted successfully with the new KTM X-BOW GT4 race car at Circuit Park Zandvoort recently. After a new Balance of Performance test at the same track, will they again step onto the podium? Or will the V8 Racing drivers with their powerful Chevrolets Camaro GT4 be crowned as winners?

Dutchmen Marcel Nooren and Jelle Beelen are currently leading the championship in the PRO division after scoring three podium finishes in the first four races. They are followed by V8 Racing team members and fellow countrymen Luc Braams and Duncan Huisman. Despite missing the first two races in France, Halek and Ebner scored 45 points in the Netherlands and are positioned in fifth.

The Red Bull Ring is a 4.3-kilometre circuit located in the heart of Austria that also hosts Formula 1 this summer. Although the length is similar to Circuit Park Zandvoort, the track has been described by the drivers as a ‘power track’. “At the Red Bull Ring you will need much horsepower,” Halek explains. “Zandvoort suited the KTM X-BOW GT4 very well with its fast corners. But we expect that it will be very hard for us to overtake at the Austrian circuit. Hopefully the pace will be good and as we are racing on familiar ground, we hope to do well!”

They are not the only one that wishes to perform well. Reigning champions and Dutchmen Ricardo van der Ende and Bernhard van Oranje are back behind the wheel of a familiar BMW M3 GT4, challenging the KTMs, Chevrolets and also Jörg Viebahn (GER) with the Aston Martin Vantage GT4.

AM driver Daniel Uckermann did himself a great favour by winning a race in the Netherlands, beating the PRO drivers. After competing with a Lotus Evora GT4 at Nogaro, the German was happy to receive the black and gold KTM X-BOW GT4 race car and he targets more victories. His nearest rivals Thomas Krebs (DAN) and Arno Klasen (GER) are 32 points short to Uckermann, but they hope to take revenge with the Porsche Cayman 981 SP. They missed out a possible podium finish after a gearbox issue in the final lap of race two at Zandvoort.

A balance of performance test (BOP) with this season’s new vehicles like the Chevron GT4, KTM X-BOW GT4, Porsche Cayman 981 SP and the Sin R1 GT4 has been conducted prior to the races at the Red Bull Ring. This must ensure even more close racing and thrilling battles for podium positions.

The Competition102 GT4 European Series will be live broadcast on the series’ official website and iPhone app. Track action starts on Saturday, June 6 and ends with both races on Sunday, June 7.