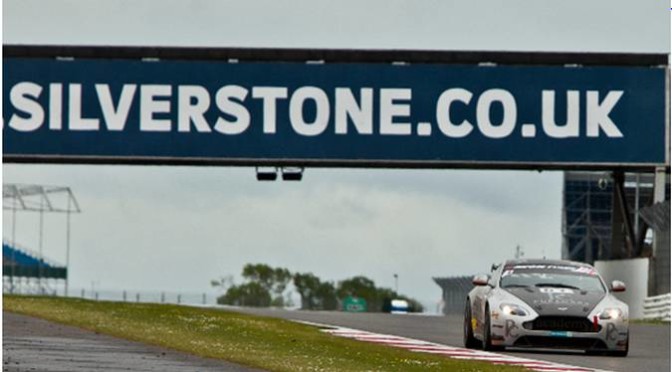 Academy Motorsport ventured to Silverstone for the British GT Championship’s longest race of the season, in the three-hour enduro last weekend. It turned out to be a frustrating one for the Pershore-based squad.

The team’s other machine, the #61 Vantage was unchanged, with Will Moore and Dennis Strandberg fighting once again for their second podium in succession following their second place finish at the last round at Rockingham.

With Nicoll-Jones focusing on team management over the past months, he had little racing experience of the Vantage, and he and Webster lined up 14th on the combined grid, with the #61 car a row ahead in 12th.

Moore made an outstanding start to Sunday’s damp race, which was broadcast live on MotorsTV in the UK. With all cars on wet tryes, he quickly scythed through the field to lead the early stages of the race, before pitting to hand over to Strandberg when a safety car was called following an incident involving GT3 cars further ahead.

Webster did the same to hand over to Nicoll-Jones, but the safety car period was extensive due to a large quantity of oil which had been displaced on to the circuit.

Both cars remained out of track for as long as possible despite the rain easing and the track becoming more suited to slick tyres. With rubber changed at the next round of stops, Strandberg and Moore had another podium in their sights.

But both cars sadly collected stop-and-go penalties for a team mistake. With the cars not held in their pit box for the mandatory period of time, both were handed 30-second penalties. It put both cars out of contention for a high placed finish.

The team is already looking to bounce back at the next round of the Avon Tyres British GT Championship at the home of the Belgian Grand Prix, Spa-Francorchamps, on July 10-11.

Before then though, the team will venture to Le Mans for next week’s blue riband Aston Martin Festival of Le Mans. The 45-minute race will support the main 24-hour competition. With one car raring to go, the team has its second car available for interested parties. They should contact boss Matt Nicoll-Jones immediately.

Nicoll-Jones says: “Qualifying was frustrating as neither car showed its true pace. Neither Dennis or I were able to hook up a quick lap to put us near the front of the grid. But there was no point in worrying about our straight-line pace as it’s a three-hour race and so much can happen.

“Sadly a simple mistake was made at one of the pit stops with a timing error. If it hadn’t have been for the penalties, a podium finish was certainly on, as demonstrated by Will’s fantastic pace at the start of the race to make up so many places.

“Heading to Spa, I’m confident that the team will be back on the podium steps. It’s a great track for the Aston and one where everyone in the paddock enjoys going to. The circuit is legendary and great to race around.

“I’d encourage any drivers who would like to race around Le Mans next weekend – and who wouldn’t – to come forward immediately, as seat availability is strictly first-come-first-taken. Not many people get the chance to race around La Sarthe on the same weekend as the 24 Hours. It’s an opportunity not to be missed.

The next round of the Avon Tyres British GT Championship takes place at Spa-Francorchamps on July 10-11.