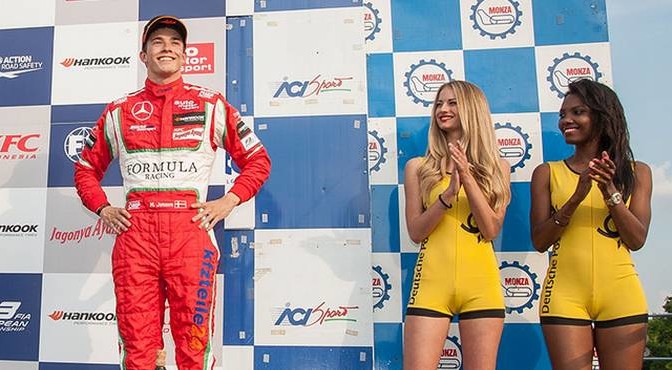 The German team kfzteile24 Mücke Motorsport from Berlin scored two podium placings at the fourth season event of the FIA Formula 3 European Championship in Monza (Italy) last weekend (30th/31st of May). The Dane Mikkel Jensen finished second at the 10th season run and third at the 11th run for the racing stable from the German capital city. He has been rookie winner with these results. At the 12th tumultuous season run he resigned after about six laps due to a collision being on position seven. After the second place of Maximilian Günther (Rettenberg) about two weeks ago in Pau (France, 17th of May) that has been the second and third podium placings this season for the racing stable of Peter Mücke. Günther finished once in the points on position ten and resigned at the other two races. His team colleague Santino Ferrucci (USA) scored points two times on position four and eight. At the opening race he resigned, same time the Italian Michele Beretta got his best placing of the weekend on position 15 in this race. The Chinese Kang Ling (all Dallara Mercedes) finished on position 26 and 25.

„Altogether it was a good weekend for our team at the FIA Formula 3 European Championship in Monza“, said the team principal Peter Mücke about the results of his young drivers. „Mikkel did a good job and our other drivers also gave their best, but unfortunately they were unlucky at the fights in the middle of the field. If you’re not able to find the slipstream at the qualifying in Monza, your chances to score a position at the front of the field are not quite high and you might get into a scrum situation during the race. Anyway, the drivers are able to gather a lot of experience in those situations.“

The best placed Mücke pilot at the overall ranking of this high class rookie series is Maximilian Günther on position six, one place ahead Mikkel Jensen. Santino Ferrucci is on position 14 at the moment. Jensen is on position three of the rookie rankings ahead Günther. The Swede Felix Rosenqvist (Dallara Mercedes) won all three races on the 5.793 km long Grand-Prix track of Monza. The next season event of the FIA Formula 3 European Championship with the season runs 13, 14 and 15 is scheduled from 19th to 21st of June in Spa-Francorchamps (Belgium), in the main programme of the ADAC GT Masters.

(Attached to this mail photos of Mikkel Jensen and Santino Ferrucci in Monza: © Mario Bartkowiak/Jegasoft Media)