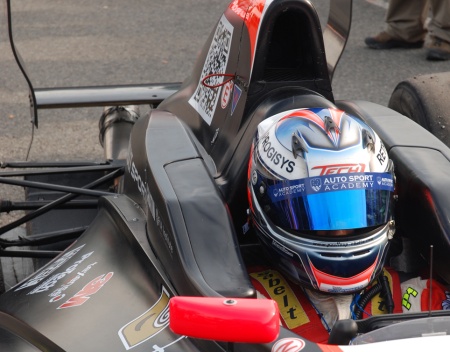 It’s the end of the holidays on the Silverstone track and Paul Loup Chatin stepped up on podium for the first time in the second race, with a third place in the EUROCUP Formula Renault 2.0 championship. A result which puts him 9th in the provisional general ranking and first of the French. The Silverstone meeting started well for the “EUROFORMULA VOLANT” who was timed  with the 6th overall best time in the first session qualifiers before crossing the line in 5th place. Paul Loup Chatin even held 4th position up until the last laps, when he was caught in a sudden downpour.

His performance is meeting expectations and the work he and his TECH 1 team have accomplished since the beginning of the year is beginning to bear fruit.
Paul Loup Chatin therefore launched into his second qualifiers full of confidence and scored an excellent 5th time which put him in an ideal position for the second race. The “EUROFORMULA VOLANT” had an excellent start and found himself 3rd at the end of the first lap. Paul Loup Chatin was then content to follow the two leaders in order to guarantee his first podium place in the EUROCUP!
Paul Loup Chatin: “I’ve been waiting for this podium for a while, so even if I was a little bit faster than the two leaders, I would have had to take some risks to overtake them and I didn’t want to compromise my opportunity. The whole team and I have worked hard since the beginning of the season and I hope that we can be even better in a few weeks in Castellet. The goal now is to keep pushing in this direction and pull off a victory by the end of the season.”
The “EUROFORMULA VOLANT”’s performances have, of course, been closely followed by Laurent Fradon, the Director of the EUROFORMULA School: “Paul Loup has been “flirting” with the EUROCUP podium for a while and this weekend he crystallised his potential. He is an excellent ambassador for our “VOLANT” which has its final selections this September and October on the La Chatre circuit. Paul Loup is now ready for victory and  why not in the next race? He is certainly capable of it.”
Paul Loup Chatin, with the full support of his TECH 1 team, will now get ready for his national challenge which will be fought out on the 16, 17 and 18 September on the Castellet circuit, and there the “EUROFORMULA VOLANT” will hope to shine.